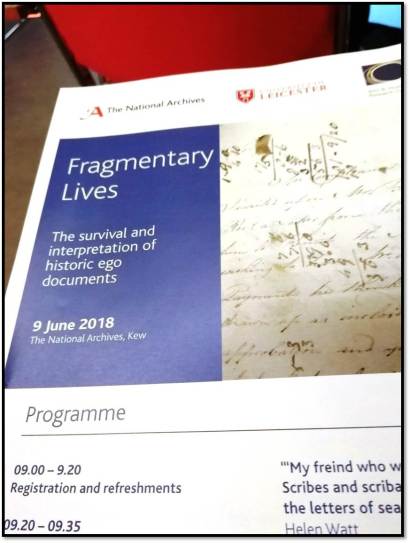 The first conference organised under the auspices of ‘In Their Own Write’ was held at The National Archives, at Kew, on Saturday the 9th of June. The theme of the conference was  “the survival and interpretation of ego documents”, and it brought together a huge range of fascinating work on the subject. For those of you who are unfamiliar with the term ‘ego document’, it refers to any written source that focuses on the personal lives and experiences of the writer. Ego documents are growing in importance in many areas of historical enquiry, particularly in the broad discipline of social history. Sources such personal letters, diaries, autobiographical writing, witness statements and petitions are now recognised as a vital and revealing way of addressing questions relating to the history of emotions, of domestic life, the boundaries between public and private lives, and the interactions between individuals (particularly those traditionally characterised as society’s powerless) and a range of public institutions and agencies. In particular, they often plug the gaps left by ‘official’ sources, and provide a voice for the previously unheard.

The conference was held in the new events suite at TNA which, though disturbingly high-tech for some of us older delegates, turned out to be incredibly comfortable and extremely user-friendly. Much of this was down to the organisational expertise and assistance of TNA’s permanent staff members and, in particular, huge thanks are due to Anna Sexton, TNA’s Head of Research, archivist Chris Day, and Lee Oliver, Head of Venue Management and Services, who took control of the technology and ensured that everything went smoothly: it was certainly a corrective to the Luddite tendency in many of us! Thanks are also due to Carol Beardmore and Geoff Monks from the University of Leicester for their help with registration.

The day’s proceedings were set in train by Anna Sexton, and kicked off with a brief explanation of ‘In Their Own Write’ by Steve King, the project PI. We then got down to the nitty gritty of the speakers’ papers. Session One took place under the broad heading of ‘The Boundaries of Public and Private’, and took in some fascinating papers looking at the topic from three very different angles. Helen Watt looked in detail at the scribal relationship between ordinary seamen during the French Wars through correspondence written by and for Richard Greenhalgh of Bury. Among many other interesting insights, Helen brought out rather wonderfully the way that Greenhalgh’s tone changed markedly (from loving affection to huffy indignance) when his parents did not reply quickly enough for his liking. Helen was followed by a quite different view of personal correspondence from Cam Sharpe Jones, a researcher at the Royal Botanical Gardens at Kew. Cam’s paper explored the development of Joseph Dalton Hooker’s life in letters. Hooker was a geographical botanist and explorer who went on to succeed his father as director of the Botanical Gardens in the 1860s. It was fascinating to see the way that his attitude towards his own epistolary identity changed over time, and how he came to accept – and even embrace – the fact that his letters shifted from being private documents to public property as he himself gained a growing public profile. The final paper in Session One was an introduction to a great new online resource, ‘Writing Lives’ (www.writinglives.org), by Emily Cumming and Helen Rogers of Liverpool John Moores University. The website is bringing together some of the many fragments of historical autobiography that have lain hidden in public and private collections until now, and Emily and Helen were keen to stress that they are eager for people to contact them and to get involved with their own families’ stories.

Session Two (“Lives Under the Information State”) began with a paper from ‘In Their Own Write’, drawing some early conclusions from our work with MH12. The main conclusion was that, following the passing of the Poor Law Amendment Act in 1834, paupers quickly adjusted to the new regime and were even able to use the growing bureaucratic apparatus in their own favour when complaining about local officials and institutional regimes. This was a theme that was taken up by Kim Price in his paper on pauper complainers and prison petitioners. Kim also drew the conclusion that, contrary to established beliefs about institutional life in England in the 19th century, paupers, prisoners and those who fought on their behalf were not entirely without influence; or, at least, they certainly had the opportunity to voice their grievances. Sandwiched between these two papers was Laura Mair’s more optimistic reading of letters from ragged school leavers, which clearly demonstrated the depth of affection and gratitude that many pupils felt towards their old alumnus. Intriguingly, the session as a whole stimulated a brief but very interesting discussion (prompted by a question from the floor) about historians’ attitudes towards our institutional past, and whether we should generally be more ‘optimistic’ in our analysis of interactions between paupers, prisoners, poor pupils and those who were charged with their care.

After the break, Session Three saw our speakers turn towards “Fragments of the Unusual”. This was an absolutely absorbing session in terms of the subjects of the papers, but also in the way that each of the three speakers presented their research in a fresh and innovative way. Steve King’s focus just a single letter, from Lorina Bulwer, an inmate in the Great Yarmouth workhouse: it just so happens that it was a letter that was stitched and embroidered on a colourful textile backing, and that it that ran to 4.3 metres (14 feet) long! Steve challenged the audience, not simply to see this as the work of a disturbed mind, but to see Lorina’s stitched letter in the wider context of workhouse complaint and protest more generally. Helen Rogers then took the floor again, and explored some of the fragments of biography and autobiography that have come down to us from a Victorian gaol, also in Great Yarmouth. Helen urged to us to look again at how we construct the lives of convicts and the poor, and the lessons we can learn from placing autobiographical writing alongside other sources. Finally, Emma Moreton from Coventry University demonstrated brilliantly some of the advantages of using corpus linguistics to analyse large bodies of lower class correspondence. Focusing on Irish migrant letters from 19th century America she showed that, through the conscientious use of tagging and data analysis, historians, linguists and others can gain huge insights into the shifting and contested meanings of basic epistolary terminology. Yet another chastening lesson for the Luddites!

The final session of the day focused on military lives reflected through the correspondence and reminiscences of active servicemen and women. Ruth Imeson Da Silva, from Nottinghamshire Archives, gave an incredibly affecting paper on the correspondence from two very different ‘Tommies’ during World War I. The affectionate, unassuming letters home from Private Charles Cobb were contrasted with the self-consciously heroic narratives constructed by the self-educated poet, William Streets, a miner who rose to the rank of Sergeant and whose work was published posthumously after the war. Despite their very different epistolic lives, the two men died tragically similar deaths on the Western Front, and those deaths are now memorialised in theirs’ and others’ wartime correspondence. Bridget Keown also looked at ego documents produced in response to the ‘Great War’, but her focus was on a hitherto neglected band of heroes: the nurses who looked after wounded soldiers behind the lines. Bridget brought out vividly, not only the stresses of nursing under the constant threat of death by attack, but also the terrible conditions that these women had to endure and the courage they brought to the role. She also demonstrated that serving nurses developed all the camaraderie and lasting friendships in adversity that the soldiers did, and it was really good to hear their story told at last through their own voices. Finally, Lorna Cahill Bannister returned to a theme explored earlier by Cam Sharpe Jones and Ruth Imeson Da Silva: that of the self-conscious creator of a personal narrative with an eye to posterity. Lorna demonstrated that, through the careful editing and abridgement of his diaries and letters, Major-General Sir Frederick Smith, who was in charge of veterinary services during the Second Boer War, not only sought to protect his own reputation, but settled a few personal and professional scores into the bargain. Once again, the boundaries between the private and the personal, in epistolary terms, was shown to be fluid and mutable.

All-in-all, it was a great day, showcasing some exciting new work in the fields of personal narratives, ego documents and epistolary relationships. The audience took a full part, coming up with some really interesting questions and contributing insightful observations. Our thanks go out to the speakers, and to everyone who came along and made it such a great success. Hopefully, it will herald the start of many new friendships and – who knows – maybe even some fruitful collaborative partnerships. We’re looking forward to the next one already!

Our first major public event will be held at The National Archives in Kew, London, on 9 June 2018:

‘Fragmentary Lives: The Survival and Interpretation of Historic Ego Documents, 1790-1940’

The conference will look at a variety of sources that focus on the personal life and experiences of the writer, such as letters and autobiographies.

Paul Carter (The National Archives) explained that ‘The Fragmentary Lives conference seeks to explore the way that the perspectives drawn from these ego documents are reshaping the future research agenda‘.

Papers will cover topics such as

See further details and information. Although the call for papers has now closed, everyone is welcome to come along and take part. Attendance is free, but you will need to register using the link above.

The full programme for our second annual conference is now available. We look forward to more fascinating papers and stimulating discussion on 20 June at the University of Leicester. Come and join us!

This project explores the New Poor Law in England 1834-c.1900, through analysis of pauper voices and agency (more...)

The project is by The National Archives and The University of Leicester, funded by the AHRC.